Monday, You are the Devil

Well, we put my dog to sleep today. Pretty bummed about that. His name was Tucker, he was a collie, and was 11 years old.  We had him for 10 years, got him from a farm when he was one.  His previous owners were moving and couldn't take him with them, and they left him at a farm that raised collies.  My mom found the add in the paper, called them up, and we drove an hour to see if he was the dog we wanted.  The farm wouldn't keep him because he didn't have papers, but he was most definitely a purebred.

Much like many large, purebred dogs, Tucker started having health problems as he approached 10 years.  Hips, internal issues, that kind of stuff.  The past couple of months, he's been having accidents on the floors frequently, and sometimes he couldn't make it up the stairs in front of our house.  Yesterday, he was eating, fell down, and couldn't get back up for a couple of hours.  That was pretty much the final decision.  We knew he didn't have a long time, but his quality of life had deteriorated so much, that the decision was made for us.  He didn't like being carried, and he couldn't go for long walks anymore, and he constantly tripped and fell.  So, my dad called up our vet, and they put him to sleep this afternoon.  I didn't go with, didn't want to.  Would have been a little much.  So, here I am, watching TV, missing my dog.  He wasn't the smartest dog, but he was my dog. 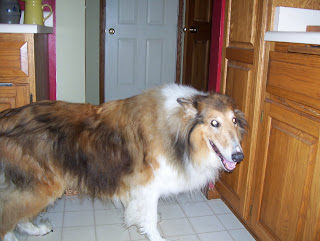 Indicated as Unimportant by Generally Disgruntled at 10:05 PM